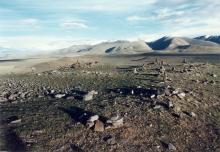 A millennium ago, Buddhist domination of Tibet spawned a new civilization, one in which the celebrated Lamaist religions of Bon and Buddhism came to hold sway. The inexorable march of time and the ascent of the new religious order slowly but surely clouded the memory of the earlier cultural heritage. As a result, many of the ancient achievements of the Upper Tibetan people were forgotten. All that remains are preserved in the impressive monumental traces of the region. Antiquities of Zhang Zhung attempts to reclaim these past glories by systematically describing the visible physical remains left by the ancient inhabitants of Upper Tibet. This collection contains the photographs of John Bellezza made during numerous expeditions to the area.

Images in this collection

The list below includes images from this Collection’s Subcollections.

This collection is Public - accessible to all site users